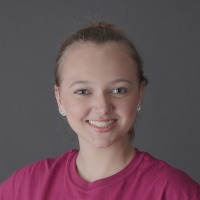 Blair Kirkland has years of experience in the styles of ballet/pointe, tap, jazz, theatrical, hip hop, lyrical, and contemporary. Blair spent this past summer participating in the Joffrey Summer Musical Theatre Intensive in New York City. She has attended the SC Summer Dance Conservatory Contemporary and Ballet Intensives. At the Excel in Motion Showcase, Blair was chosen by Alex Wong to perform his contemporary choreography. She is a member of the Bailey Fine Arts Competition Company, and had the opportunity to perform with the company in Disney. While there the company had the opportunity to train with working Disney professionals. Blair has performed her solos at competition and received Elite Platinum scores, along with many other accolades, including scholarships and judge’s awards for Technique and for Showmanship. She was also honored to be selected to compete in Platinum National Dance Competition’s Ultimate Invitational. Blair has performed for many years with Dance Theatre of Columbia. She has performed in DTC’s Wizard of Oz, Red Riding Hood, Babes in Toyland and Alice in Wonderland. Blair appeared in Columbia Children’s Theatre’s professional Mainstage production of Seussical. With CCT, Blair has also performed in Bugsy Malone (Blousie), Shrek the Musical (Gingy), Anything Goes (Angel), the Music Man (Zaneeta), and Willy Wonka and the Chocolate Factory, and studies voice there, as well.